Funds established today at the Scranton Area Foundation will provide an essential stream of income decades ahead to meet the needs of our changing community.

If you are interested in philanthropic endeavors which will influence the well-being of our community, then contact us to learn how we can help.

We are here to help you achieve your current and long term philanthropic goals. Whether you want to make a one-time gift or start a fund to promote a legacy, we offer options for giving now and giving later.

Whether you want to make a one-time gift, establish a fund, or defer your gifts through a will or other planned giving, we can help you find the best way to meet you charitable goals and enhance the quality of life for all the people in Lackawanna County!

In honor of its 60 year legacy of giving, the Board of Governors of the Scranton Area Foundation has launched a 60th anniversary campaign to raise $60,000.00 for the Foundation’s Community Needs Fund. Led this year by Chairman Kathleen Graff, the Board of Governors is proud to announce the commencement of this short campaign, which will provide assistance to our region’s nonprofits in perpetuity.

The total amount raised during this campaign will be announced on the evening of October 16, 2014, 5-8 p.m. at the Radisson in Scranton when hundreds of people from all walks of life will gather at a public event to celebrate the Foundation’s 60 year history. The celebration, which is free with an RSVP, will feature this year’s Margaretta Belin Chamberlin award recipient Jane Oppenheim, more than 20 of Lackawanna County’s nonprofit organizations, and photo displays highlighting the history of the Foundation and the Funds managed by the Foundation. 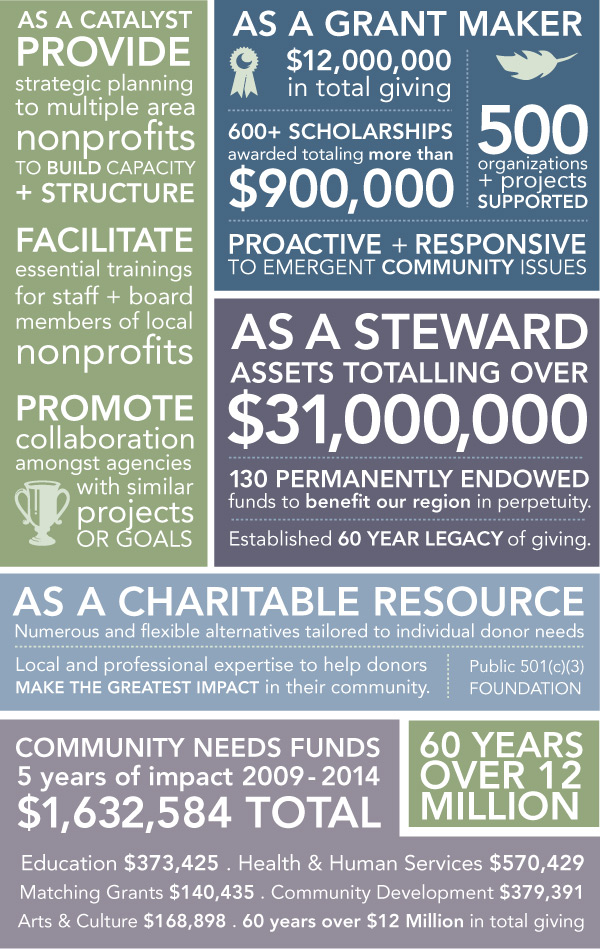 The Scranton Area Foundation began with a gift of $1 million and that gift has grown to over $31 million in the decades since.

With your support, we will be capable of making an even bigger impact in our community. In the years ahead, we will fund innovative new projects, optimize collaboration between agencies, streamline resources, help nonprofits build their capacity, provide matching and collaborative grants to our neighborhood’s organizations…the list goes on.

Your gift to the Scranton Area Foundation will impact our region in perpetuity.

View a list of our past projects by year